× Stephanie Vozza is an experienced writer who specializes in small business, finance, HR, retail and real estate. She has been a regular columnist for FastCompany.com for more than three years, earning some of the site's highest page views. Her byline has also appeared in Inc., Entrepreneur and Parade, and she has written for companies that include LinkedIn, Staples, Hewlett Packard Enterprises, Capital Impact and Century 21. She was recently named one of the top business writers by HubSpot. Stephanie is also the founder of The Organized Parent, a website that offers product and tips to streamline family life; she sold the company to FranklinCovey in 2011.

COVID-19 has been a global health crisis as well as an economic one. In America, the pandemic caused widespread unemployment, reaching its peak at 14.8% in April 2020 — the highest number on record since data collection began in 1948, according to the Congressional Research Service.

While millions of Americans have gone back to work or found new jobs, 14 million are still continuing to collect unemployment benefits, according to the U.S. Department of Labor. And in June 2021, the long-term unemployment rate, which quantifies those who have been jobless for 27 weeks or more, was reported at 4 million, according to the Bureau of Labor Statistics.

Where is there a Labor Shortage?

The labor shortage exists mainly in the hourly labor pool. You’ve likely seen dozens of “Help Wanted” or “Now Hiring” signs at your local coffee shop, grocery store or other retail establishments. That’s because in some cases, the current enhanced federal unemployment benefits equate to more than what the typical hourly worker earned pre-pandemic — and could earn now.

“Everything from hospitality to cleaners, warehouse workers and logistics — these are all individuals in the hourly labor pool that are very much in high demand and increasingly difficult to get a hold of,” explains Arran Stewart, co-founder of the job search site Job.com.

“They’re saying to themselves, ‘I can stay home and get X amount of money, or I can go back to a job, work hard and collect Y. Why would I do that for the same or just a little more money?'” says Stewart. “The economic support was meant to help people through a tough time, but if it’s too easy, they won’t go back to work.”

Business Insider reports that the following industries are suffering the most for candidates:

To combat the long-term unemployment rate, 25 states have ended or plan to end the federal unemployment benefits package, eliminating the $300 weekly unemployment supplement, before its formal expiration.

“While these federal programs provided important temporary relief, vaccines and jobs are now in good supply,” Maryland Gov. Larry Hogan told CNBC. “And we have a critical problem where businesses across our state are trying to hire more people, but many are facing severe worker shortages.” 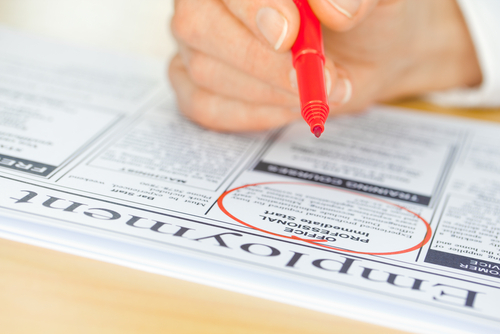 Federal aid is just one issue contributing to the long-term unemployment rate. The pandemic spurred a lot of deep thinking, and many people began asking themselves how they wanted their careers and lives as a whole to look.

Many older workers decided to retire, or retire early, at the onset of or midway through the pandemic. Others decided to move across the country or make a career shift and are waiting on the sidelines before jumping back into a 9 to 5.

The allowed increase in family time also played a role. “About 2 million women who were in the workforce pre-COVID-19 are deciding not to return,” says Stewart. “Their families have learned to survive on one salary, and they’ve discovered they want to stay home with their children.”

And while 49% of U.S. adults are fully vaccinated, according to USA Facts, some people are still concerned about returning to in-person work due to health risks. “People are still nervous,” says Jessica Schaeffer, vice president of LaSalle Network, a staffing and recruiting firm. “Parents who have children under the vaccination age are hesitant to go back and potentially expose them.” And others who had contracted the coronavirus are still dealing with long-haul health complications.

How A Small Business Can Attract Workers

There’s positive news on the horizon, though. As the extended federal unemployment benefit comes to an end, companies may find their hiring efforts get easier. The return to school in the fall will also be helpful for the parents who would like to reenter the workforce. “Schools are going back in person, which will help parents who don’t have day care,” says Schaeffer. “This will also help put more candidates into the talent pool.”

To prepare to compete for talent, here are a few pieces of advice.

Consider your entire employment package, says Schaeffer. “A lot of small businesses can’t compete on wages,” she says. “So, think about what you can offer. Some companies can give a sign-on bonus or child care benefits.”

Look at your industry and find a way to set yourself apart from similar-sized businesses.

Stewart suggests looking for talent in new places. “Social media is a great way of finding people,” he says. “The usual places, like Indeed, LinkedIn, or Job.com are still good, but they may not be catching people’s eyes right now.

“If someone is on Facebook or Instagram and they see your post about a great job that pays $18 an hour, they might decide to apply. It’s about discovery and being in the places where they are today.”

Low-wage workers often struggle to physically get to work. So, be creative with how you structure shifts. Move clock-in and clock-out times away from rush hour, or offer options based on what works for employees’ individual commuting schedules. For example, if the most convenient bus for them doesn’t run past midnight, but your bar’s shifts always end around 2 a.m., they likely won’t consider working with you.

You could even consider offering reimbursement for public transportation fares or rideshare expenses for late-night closing or early-morning opening shifts.

A rebounding economy takes time, but small business owners should remain optimistic and stay the course. “When there’s a rise in unemployment, it has a ripple effect, and small businesses suffer the most because they usually have lower cash reserves and buffers,” Stewart says.

“We’ve experienced a level of economic scarring. It’ll take some time to repair that scar.”

Need funds for better recruitment tactics and salaries? Check out National Funding’s small business funding solutions or fill out our contact form to contact a representative.

SBA Disaster Business Loan Application: How Does it Work and How to Check Loan Status?