President Donald Trump has promised to change course from the Obama administration on a number of business-related issues, including taxes, health care and regulations. If Trump is able to follow through on his promises, small businesses need to know how these changes will affect them and be prepared for a different business climate from what they’re experiencing now.

Throughout his campaign, Trump spoke out against the Affordable Care Act for hindering growth due to its cost to business owners, and he has promised to repeal and replace it with a free-market solution. Another major component to Trump’s platform is lowering taxes for businesses and individuals and getting rid of regulations he believes are antithetical to business growth and job creation.

Here are some key areas small business owners should keep an eye on:

The Affordable Care Act
If Trump’s agenda makes its way through Congress, business owners should expect a repeal of the Affordable Care Act, though Trump may be open to individual elements of the law. Trump expressed support for provisions that allow children to stay on their parents’ health care plans until age 26 and banning insurers from denying coverage to patients with pre-existing conditions, in an interview on 60 Minutes shortly following the election. A full repeal would mean an end to the individual and employer health insurance mandates currently embedded in the law.

Trump has also said he doesn’t want the 20 million people insured through the Affordable Care Act to lose their insurance. Under his new plan, Trump would allow insurers to sell plans to individuals and businesses across state lines in an attempt to increase competition among insurers and drive down prices. His plan would also make it possible for individuals to deduct their health insurance premium costs from their taxes, which businesses are already allowed to do.

The last two major components of Trump’s proposed health care plan are to offer Medicaid block grants to the states, which would allow them to utilize the funds for health care in a way state legislators feel is most pertinent to their state. Lastly, Trump wants to give individuals the option to contribute to tax-free health savings accounts, which can be passed down through families and utilized by any family members who need it. If Congress repeals the law, it would mean businesses would no longer be required to offer health insurance to their employers. This would likely reduce a business’s expenditures, but it might also send employees looking for jobs that do provide health insurance. 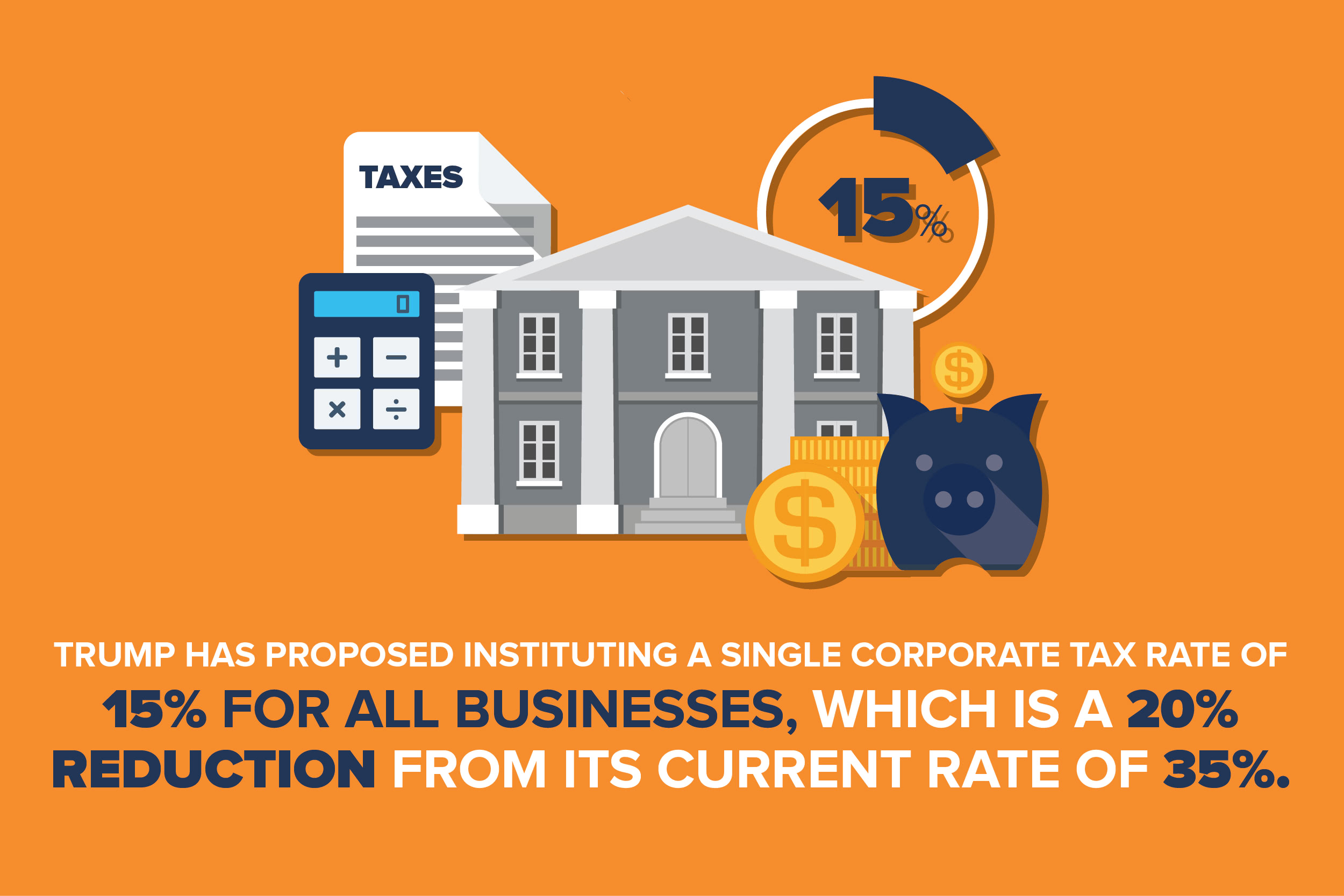 Business owners might see lower taxes under a Trump administration. On the campaign trail, Trump promised to simplify the tax code for businesses and individuals by reducing the number of marginal tax brackets. Under his proposed plan, Trump would reduce the number of individual tax brackets from seven to three at rates of 12, 25 and 33 percent depending on an individual’s income level. Currently, the top marginal tax rate is 39.6 percent. Trump has also proposed instituting a single corporate tax rate of 15 percent for all businesses, which is a 20 percent reduction from its current rate of 35 percent.

Trump’s plan would offer a one-time repatriation tax of 10 percent for businesses that are holding profits offshore in an attempt to lessen their tax burden. The soon-to-be president’s proposal would also eliminate the death tax and tax capital gains held until death. Small businesses and family farms would be exempt from this tax, according to Trump’s official website. Lastly, Trump wants to abolish the corporate alternative minimum tax.

Regulations
At a New Hampshire town hall event in October, Trump said that as many as 70 percent of federal regulations were unnecessary and could be eliminated. In addition to the Affordable Care Act, another piece of legislation he opposes is the Dodd-Frank financial reforms passed in the wake of the recession. Trump has previously stated that he would like to get rid of these regulations.

This would also mean abolishing the Consumer Financial Protection Bureau, which was borne out of the Dodd-Frank legislation. The agency has passed a series of regulations that tighten lending rules and impose harsher punishments for risky lending behaviors. In some instances, these reforms have made it harder for banks – particularly smaller banks – to lend to small business owners because of increased lending scrutiny and higher standards for entrepreneurs to meet to get approved for a loan. 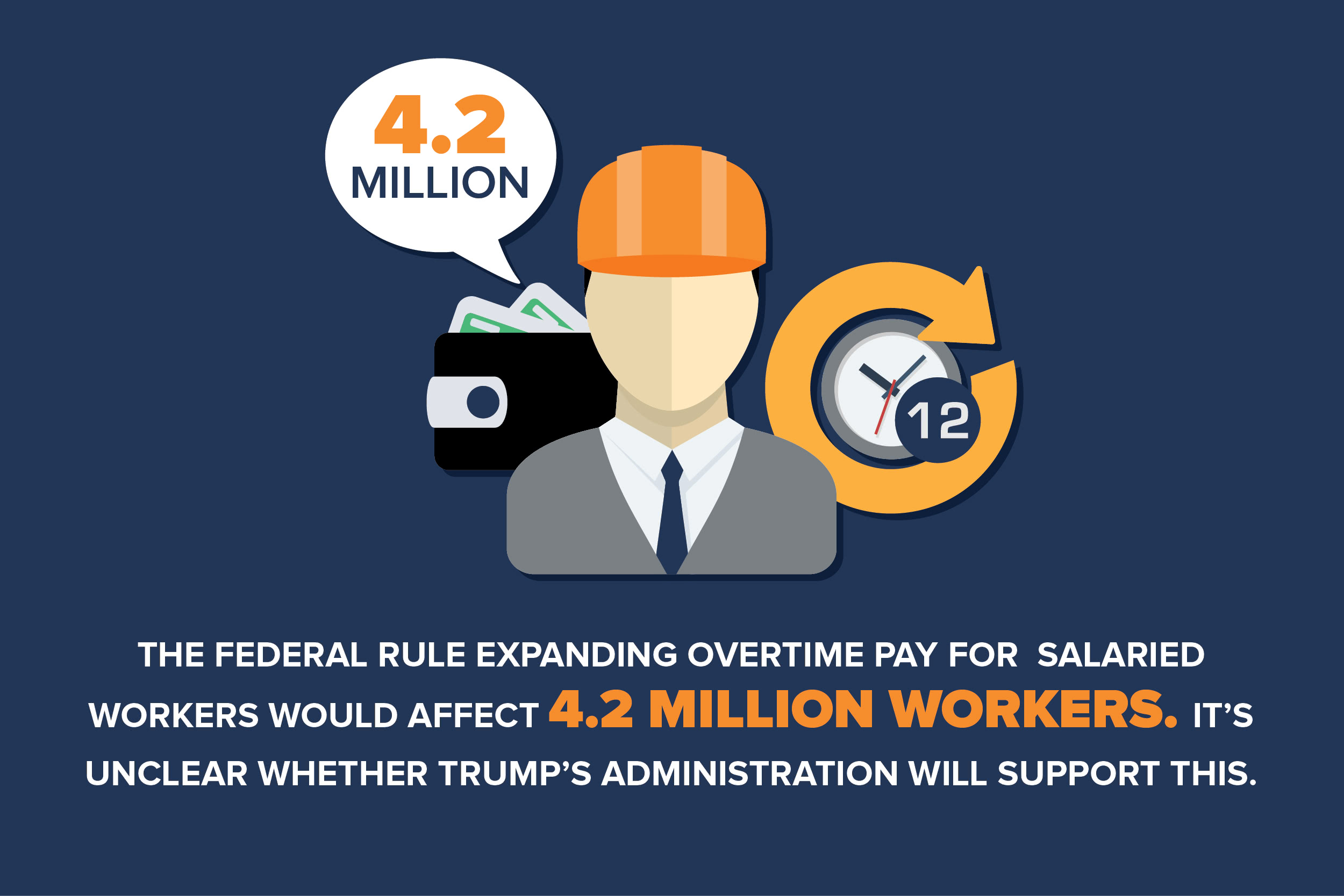 Similar to the fight for overtime wages, the minimum wage debate has been in full swing across the country in the past year. Many cities and states have raised their minimum wage well above the federal level, but it is unclear whether Trump would advocate for a higher federal minimum wage. Trump has changed his position on the issue many times, but most recently at a press conference in July he said the federal minimum wage should rise to $10 an hour from its current level of $7.25.

As the country welcomes a new president, business owners should brace for changes. Although nothing is certain, entrepreneurs should expect fewer regulations, lower taxes and extensive changes to the current health care system. Regardless of any policies that change under Trump’s presidency, it is critical that businesses prepare ahead of time – but that’s true in any environment, right?

IRS Form 4562 Instructions: How to Nab Your Section 179 Deduction

How to Pay Small Business Taxes: A Beginner’s Guide